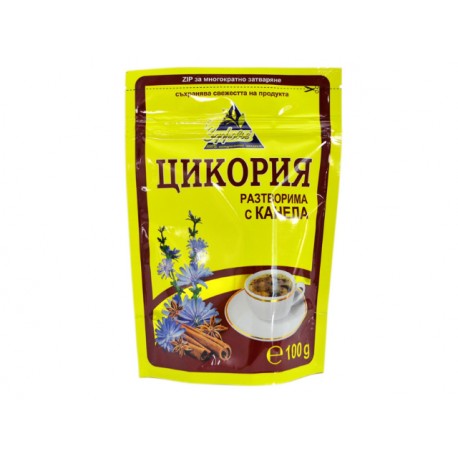 Used as a substitute for coffee. It does not contain caffeine. The combination of chicory and cinnamon has many healthful properties.

Cinnamon is a regulator of blood sugar levels. In combination with honey, it activates the pancreas, increases insulin production, and absorbs glucose from the cells. The chemical ingredients, as well as the ethereal oils contained in it, give cinnamon antimicrobial and antimycotic properties.

It acts favorably on the entire digestive system, and in particular, on the stomach, aiding the secretion of gastric juice and awakening the appetite. In medical practice it is used as an antiseptic agent.

Cinnamon contains fiber and calcium that remove the bile salts from the colon and thus protect it from cancer.

Preparation: 1-2 teaspoons dissolved in 150 ml of water. According to taste flavored with sugar, milk, cream.