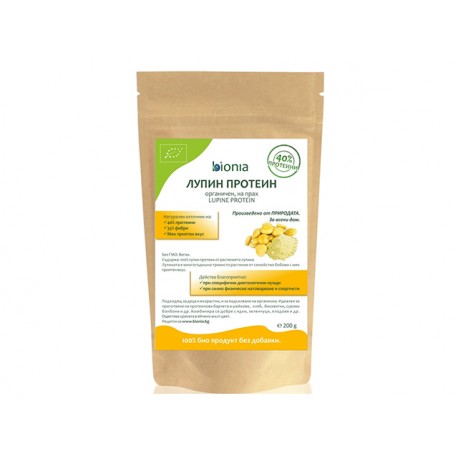 Lupine has been used for more than 4000 years to feed animals, but also as a green manure because it has the ability to improve the soil on which it grows. Since the 19th century, lupine has been used as a decorative plant and as a food for humans.

Today's interest is white lupine. It is characterized by high nutritional value. Its seeds are low in fat, at the expense of which they have high fiber and protein content. Some believe they can be used to prevent some cardiovascular diseases.

White lupine seeds are included in drinking shakes. They are also used as a substitute for soy. This is done after several times of boiling to remove toxic substances. They contain many vital amino acids.

Lupine protein is a natural source of:

- for specific dietary needs
- in heavy physical exercise and athletes

100% protein from the lupine plant.

BG-BIO-04
Agriculture outside the EU