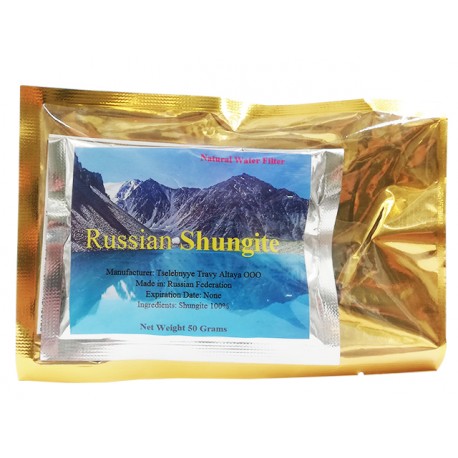 Shungite is the oldest carbon-containing mineral on the planet. The molecules of this carbon are called fullerenes.

Shungite is the oldest carbon-containing mineral on the planet. The molecules of this carbon are called fullerenes.

The Royal Shungites are located in the lower limbs of the earth's crust and are over two milliard years old. The high concentration of fullerenes makes it possible to assume that their origin is cosmic. Such fluorescents were found in falling meteorites.

Shungite is a universal sorbent. Has the ability to purify water from harmful impurities. The shungite absorbs many different pollutants on the surface, removes the turbidity of the water and gives a soft and fresh spring flavor. Through its bipolar properties, the shungite is able to mix with all the components of nature - organic and inorganic.

Shungitе saturates the body with useful microelements. Shungite water is the foundation of a healthy lifestyle.

Shungite is a natural antioxidant and immune stimulant that suppresses the development of many allergic reactions.

Leave it for 2-3 days. Depending on the amount taken, add water. The water will be ready for use after 3 hours.

Rinse shungite no less than once every 5 days. The more often you wash the shungite, the more active the minerals work.

Drink from the shungite water at least 2-3 cups a day.

Shungite should be replaced every 5-6 months.

Not to be taken by pregnant women, nursing mothers, children up to 14 years of age, individual intolerance to the product.