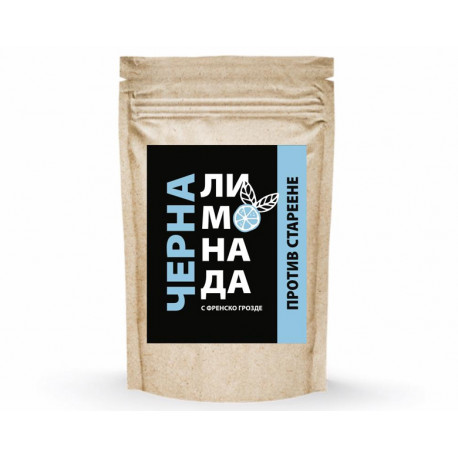 Black Lemonade - "Anti-aging" is a healthy substitute for soft drinks, which most often contain large amounts of sugar, dyes, preservatives and harmful ingredients.

The delicate, refreshing sour taste is due to the lemon.

The cleansing effect - of activated coconut charcoal, which is also responsible for the surprising black color of the cocktail.

Blackcurrant
Blackcurrant contains a large amount of flavonoids, which are considered the most important nutrients for the health of the cardiovascular system. It also contains a large amount of Omega-3 fatty acids, important for the health of the whole organism. Contributes to the reduction of bad cholesterol (LDL) and increase good cholesterol (HDL) in the blood. Improves blood circulation to the heart, thus reducing the risk of heart attack, stroke or high blood pressure.

Premature aging is an increasingly common problem. It can be slowed down by eating foods rich in antioxidants. Blackcurrant contains a large amount of the powerful antioxidant vitamin C, which protects against cell damage caused by free radicals.

Finnish birch xylitol
It is characterized by IG = 8. Takes care of dental health - protects them from caries (prevents the development of carious bacteria - especially the most dangerous streptococcus mutans) and strengthens tooth enamel. It has antibacterial action - counteracts the development of gastrointestinal bacteria, especially helicobacter pylori.

Activated coconut black carbon
Powerfully detoxifies the body. Negatively charged carbon particles attract the positive ions that characterize toxins and poisons, trap them, and then remove them from the body in the feces without laxative effect.

May contain traces of gluten, mustard, peanuts, sesame and derivatives.

Add 10 g (2 full measuring spoons) in 200 ml carbonated water or other beverage and mix well. Take once a day.

Dietary supplement. Do not use as a substitute for a varied diet. Do not exceed the recommended daily dose. Not recommended for pregnant and lactating women.