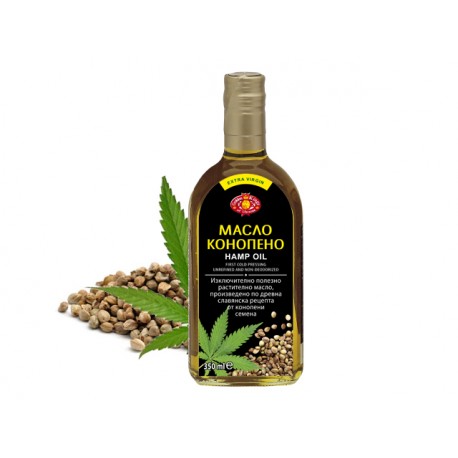 Manufactured by means of mechanical operations using the method of the first cold pressing.

This wonderful useful vegetable oil is made according to the latest vitamin-preserving technology of hempseeds.

Since ancient times, the Slavic peoples made and ate delicious and very popular hemp oil, having many useful properties, which are almost forgotten today. Hemp oil has pleasant aroma of freshly cut grass.

This delicious oil adds subtle nutty pungent flavor to many dishes. Hemp oil is an excellent alternative to olive oil and butter.

It is used as high-quality vegetable oil for dressing all sorts of salads and other cold vegetable meal. It is successfully used when roasting on the grill, pan-frying, as well as in marinades and sauces.

According to the chemical composition, hemp oil is the closest to the linseed oil but as opposed to it this tasty oil has delicate nutty pungent flavor. Hemp oil along with linseed oil, green leafy vegetables and fish oil is one of the few food products that contain the necessary for our body inactive form of polyunsaturated fatty acids, i.e. OMEGA-3. Apart from the many vitamins that are so rich in hemp oil, it contains minerals of zinc, calcium, iron, manganese, phosphorus, potassium and sulfur. Valuable unsaturated fatty acids contained in the oil dry out harmful cholesterol from our body and increase immunity. Besides, hemp oil contains bactericides, glycerides and amino acids.

Two important fatty acids contained in hemp oil are needed for growth and maintaining the cell membranes. These are linoleic and alpha-linoleic acids. Unrefined hemp oil contains up to 60% linoleic acid. Alpha-linoleic acid is mainly contained in algae, in shellfish meat and fish oil. Only a few seeds of higher plants contain substantial contents of this essential acid: hemp, flax and soy.

Hemp seeds have been used for food by humans for a long time. According to scientific research, hemp seed is just a fantastic food product that contains almost all the necessary amino acids, unsaturated fatty acids in an optimum ratio, a lot of vitamins and microelements. For centuries in Russia people made oil of hemp seed, which was deservedly famous for its nutritional and medicinal qualities. This oil, together with linseed oil, was the main vegetable oil in the ration in Russia but in the 18-19th centuries it gradually yielded the pas to the cheaper sunflower oil.

Recently, however, with the efforts of enthusiasts production of hemp oil gradually restores, and consumers can see the product on store shelves once again. This oil has a bit strange light green colour, nice aroma and a slightly sour taste. It is produced of hemp seed by means of cold press, so it fully retains all the useful qualities of the original product.

Hemp oil as health food made its name only recently, but declared itself very convincing. Hemp oil is a rich source of OMEGA-3 fatty acids, which are sometimes in severe shortage for the human body.

The main components of hemp oil, as well as any other vegetable oils are fatty acids (99.9%). The only thing is that fats are different, and their combination differs in every kind of oil.

Let us consider the composition of hempseed oil in greater detail:

tetrahydrocannadibiol is a substance, having the strongest psychoactive effect. Its concentration in hemp oil is very low (and in some kinds of this oil is absent), somewhere 1:1000000. In order to show some of its effects, it is necessary to drink at the same time about 6 to 9 liters of hemp oil, which is practically impossible. In recent years anticancer activity of this substance has been proven.

cannadibiol is a substance, which does not have any effect on the psyche, but it has a direct impact on the system of anandamides, which are produced by the human body and are responsible for the body's response in the event of the immune system failure.

Probably no one would argue that the human body needs fats for full metabolism processes. But there are only two types of fat that cannot be synthesized by our body on its own. These are OMEGA-3 and OMEGA-6 fatty acids. And they are needed by the human body in a certain ratio. So, this ratio contained in hemp oil is very close to ideal. For comparison, we present data on the ratio of OMEGA-3 to OMEGA-6 in other oils, containing them: hemp oil - 1:3, linseed oil – 4:1, rapeseed oil - 1:2, soybean oil - 1:7.

This oil is a product of high biological activity, proven by the long history of its use! In addition, hemp oil is perhaps the only stuff, which is absorbed almost 100% by the human body. 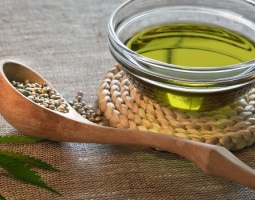 Hemp oil take care of our health. Find out how!

Hemp oil has a beneficial effect in diseases of the heart and blood vessels, increases endurance, reduces inflammation, improves immunity.