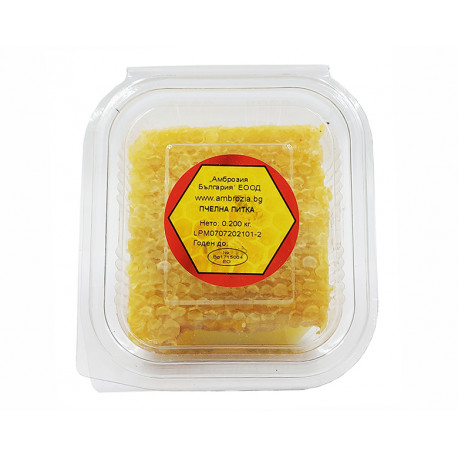 The honey stored in the honeycomb is the purest, crudest form of honey, and the wax from which it is made has nutritional value and a number of health benefits.

- 100% natural product
- The purest form of honey
- Made in Bulgaria

Honeycombs are wax combs on which the bee family lives and develops. They are built of cells in which developing bees are kept and stocks of honey and pollen are stored.

The honeycombs, which are both a home and a nest for the bees, consist of two vertical layers of hexagonal cells, touched by their pyramidal ones, composed of three rhombic bottom planes towards a common partition. Bees always build from top to bottom and strictly vertically.

The wax that makes up honeycomb contains very long chain fatty acids, along with long-chain alcohols. The honey stored in the honeycomb is the purest, crudest form of honey, and the wax from which it is made has nutritional value and a number of health benefits, such as liver care, regulation of cholesterol levels.

The honeycomb is also known as "Honey Chewing Gum". By chewing honeycomb, you allow active biological compounds to enter your body. It is also an effective method for cleaning teeth and gums, removing plaque, disinfecting the oral cavity, which helps maintain good oral health.

Consumption of honeycomb has a beneficial effect on:
- Strengthening the immune system;
- Relieve the symptoms of various allergies;
- Increasing the body's energy supply;
- Improving the work of the gastrointestinal tract.

Like chewing gum, the honeycomb is chewed, after which the wax is discarded.