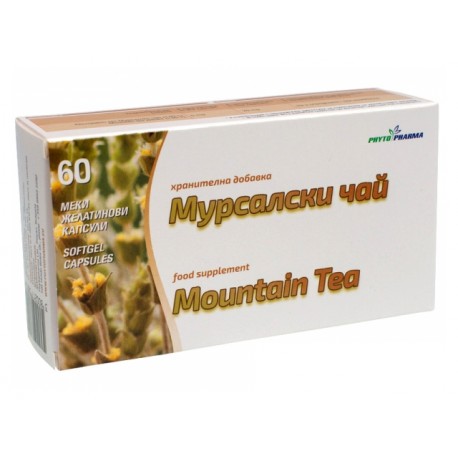 The food supplement, which contributes to the protection of cells from oxidative stress, helps to relieve symptoms of cough fixation with colds and lung ailments.

Species Sideritis, are botanically very closely related species of the same genus and are described as endemic species on the Balkan Peninsula. Wild and cultivated since the last century in Central Balkan mountain tea is traditionally used as a healing aromatic herbal tea in folk medicine Balkan countries for centuries. Mountain tea is widely used mainly for the relief of symptoms of pulmonary diseases such as cough of different origin and indigestion. The pharmacological properties of the plant described in the scientific literature as anti-inflammatory and antimicrobial properties confirm the traditional use for the relief of cough associated with common cold, as well as for gastro-intestinal disorders.

The food supplement is administered as an aid to the diet, which:
- contributes to the protection of cells from oxidative stress;
- helps to relieve symptoms of cough fixation with colds and lung ailments;
- supports digestive system and helps to alleviate gastrointestinal ailments;
- favours memory.

As a food supplement for adults take one or two capsules twice a day with a meal.