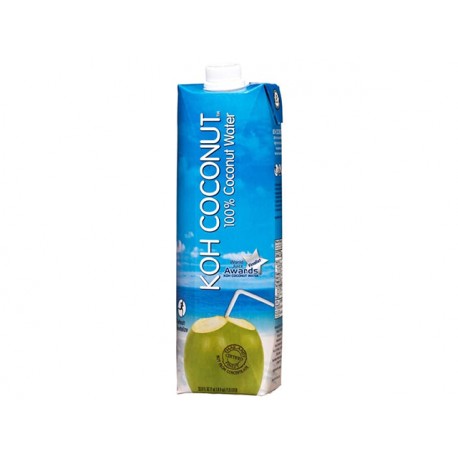 Out ot stock
Notify me when available

Natural coconut water. Not from concentrate. No added sugar and sweeteners. Produced in Thailand.

- 100% coconut water
- Not from concentrate
- No added sugar and sweeteners

Organic Coconut Water is tapped from the very centre of the coconut and is refreshing and revitalizing. The water is naturally filled with potassium and electrolytes, making it extremely healthy and refreshing. Many people, including athletes, use coconut water to hydrate themselves after heavy activity.

Coconut water has long been a popular drink in the tropical countries where it is available fresh, canned, or bottled.

Coconuts for drinking are served fresh, chilled or packaged in many places. They are often sold by street vendors who cut them open with machetes or similar implements in front of customers. Processed coconut water for retail can be found in ordinary cans, Tetra Paks, or plastic bottles, sometimes with coconut pulp or coconut jelly included.

Coconut water has been used rarely as an intravenous rehydration fluid when medical saline was unavailable.[5] The story of coconut water being similar to human blood plasma originated during World War II when British and Japanese patients were given coconut water intravenously in an emergency because saline was unavailable.[6] Since then, this rehydration technique has been used only for short-term emergency situations in remote locations where plasma is not available.

Coconut water has been used in the folk medicine practices of Jamaica for such uses as the treatment of diarrhea.

For direct consumption or as a base for shakes and fruit drinks.

Shake before use. Consumed chilled. After opening, store in a refrigerator and consume within 2 days.