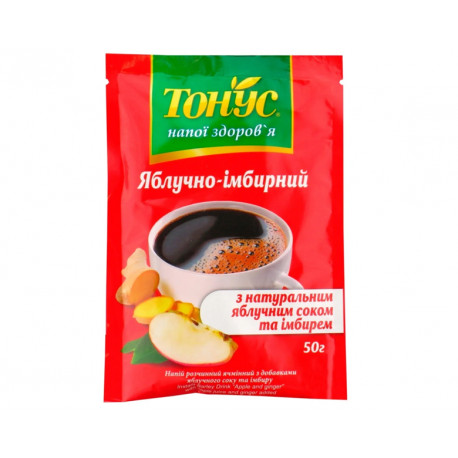 Natural product with a well-balanced composition, which includes barley, concentrated apple juice powder, ginger, cinnamon and cloves. The instant drink is intended for people who take care of their health and lead an active lifestyle, it is especially useful for active sports people.

Apples also contain a significant amount of phosphorus, which makes them valuable for the brain and nerves, especially in nervous exhaustion. Apples reduce appetite and improve stomach function.

Ginger is a powerful antioxidant that is often used in various types of inflammation. Ginger helps the body recover faster from colds, sore throats and flu. It stimulates the secretion of mucus from the bronchi and clears the airways.

Cinnamon contains antioxidants that protect cells in the body from free radicals. Cinnamon reduces swelling in various parts of the body, fights infections, repairs damaged tissue and improves symptoms in patients with arthritis or gout.

Cloves are suitable for use in gastrointestinal disorders. It has been shown to act on nausea, flatulence, constipation, heartburn.

Pour 2 tsp of the drink with 150 ml hot water or milk. It can be sweetened with a sweetener of your choice.