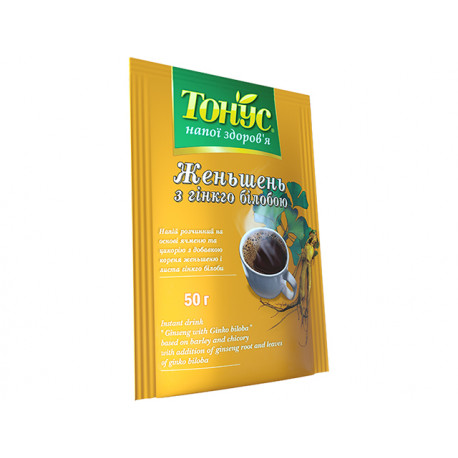 Nowadays, we can often meet people who love coffee, but can not accept it for various health reasons. The solution is extremely easy - we replace coffee with its natural substitute - an instant drink based on chicory and barley with added ginseng root and ginkgo biloba leaves.

Soluble chicory of granules has a rich taste with bitter notes. The plant is known as a useful alternative to coffee without containing caffeine.

A warm beverage of soluble chicory of granules is recommended in a state of constant fatigue (asthenia), to improve mental abilities and increase in concentration.

Ginseng is a powerful immune stimulant, tones and has a tonic effect. Ginseng lowers blood sugar and cholesterol, thus reducing the risk of diabetes and cardiovascular disease. It has an antiviral effect by neutralizing herpes viruses and reduces the virulence of hepatitis viruses and the AIDS virus.

Pour 2 tsp of drink with 150 ml hot water or milk. It can be sweetened with a sweetener of choice.