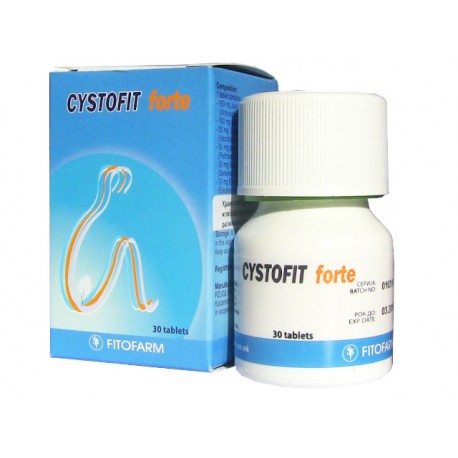 Cystofit Forte is a natural product that helps with inflammation of the urinary tract, especially cystitis and prostatitis, displays toxins from the body.

Impaired function of the urinary system is becoming a common problem in female population. There are many different reasons for that: weakening of general and local immunity, infections, allergies and health problems triggered by chemical agents and radiation. In the last several years, it has been confirmed a very close relationship between urinary system and gynecological disorders. Health risk for developing urinary infections in woman is on a very high level. To reduce such occurrences a phytotherapy is successfully employed, in means of using medicinal plants with antimicrobial, anti-inflammatory, diuretic and immune-stimulatory properties. Enforced diuresis has a significant impact on all functions in human body. A relatively new medicine branch – endoecologic medicine, which in recent few years has been widely spread out, takes an important role for sustainable health in conditions of global environmental pollution. In order to increase the excretion of degradation products (present in the tissues aside from blood vessels, on which are counted over 83% of toxins) together with water, one of the most accessible therapy schedule is the use of medical herbs. Those with proven characteristics to stimulate fluid transport in tissues and improve lymphatic drainage are represented by: parsley, rosehip,Cranberry's leaves and etc.

Java tea
Java tea is used as mild diuretic in acute (concomitantly with conventional therapy) and chronic disorders of urinary and genital system, especially in case of kidney diseases followed by oedemas, albuminuria, azotemia and renal calculus. It is proved that use of Java tea in patients with expressive atherosclerosis in brain and increased blood pressure, associated by impaired renal and hepatic function, results with general health improvement and disappearance of some symptoms typical for the underlying disease. Diuretic effect is followed by increased elimination of urine, uric acid and chlorides. Java tea possesses wide range of useful actions and can be used in long-terms.

Birch leaves
These leaves are mainly used as diuretic agent. It has been clinically proven that use of Birch stimulates excretion of urine and retraction of oedemas. The action of Birch leaves is applied in treatment of urinary and genital disorders, and also in rheumatism. As well, it is known that Birch leaves can be used as anti-inflammatory agent and vitamin. They are commonly used in acute fever to stimulate perspiration, to reduce oedemas provoked by hart or renal failure, rheumatism or joint disorders.
Birch leaves are also used in chronic pyelonephritis, cystitis, existing calculus in urinary tract and chronic cholecystitis.

Parsley leaves
Back in the history, parsley has been used for centuries in case of digestion problems, gall-bladder or renal calculi, oedemas due to heart failure, for improved food digestion, disorders of menstrual cycle and prostatitis.With clinical trials has been confirmed that the parsley has strong diuretic action. Upon these findings, parsley has been used long time ago to stimulate diuresis and also in case of impaired function of urinal bladder.
Parsley is also efficient in heart decompensation. This is due to its diuretic and cholagogue action which causes decrease of congestion.
Parsley leaves have detoxication effect. This action is manifested throughout enforced transport of tissue fluids and lymphatic drainage. Due to such enforced fluid flow-rate, the toxic compaunds accumulated inside the cells are eliminated, respectivly.

Cranberry
This herb strengthens the walls of blood vessels, reduces capillary permeability and fragility, has emphasized anti-inflammatory and antiseptic action.
As basic action of cranberry’s leaves are considered: diuretic, disinfectant and cholagogue (promotes bile excretion). It has been confirmed that, cranberry’s leaves increase the effectiveness of antibiotics and also, stimulate phagocytosis. To enhance the diuretic action, cranberry’s leaves are commonly used concomitantly with other herbal components. They are most beneficial in case of: renal calculus, gout, diabetes, inflammatory processes in kidneys, urinary channels and urinal bladder (chronic pyelonephritis, cystitis, nephritis).
In folk medicine, cranberry’s leaves are often used for treatment of colds (fever) or reduction of oedemas. In experimental trials conducted in previous years it is established that cranberry’s leaves have a unique capability to clear the walls of main blood vessels and bring them back to normal function. This might be useful in patients with atherosclerosis or those exposed at higher risk.

Saw palmetto
The fruits of Saw palmetto are used as diuretic and antiseptic agent in case of urinary tract inflammation.

Eleuthero
Belongs to a group known as classical adaptogenes. This herbal extract supports the immune status, upgrades the muscular and mental condition, improves the blood supply in brain, has antioxidant activity etc. Eleuthero is selected as ingredient in this formulation based upon scientific data, which confirm its ability to increase immune resistance and in case of diseases, to help to avoid complications and fast recovery after illnesses.

Why you should use CYSTOFIT forte:

• helps in case of urinary tract inflammations, especially in cystitis and prostatitis;
• participates in excretion of toxins out of human body;
• helps to minimize the fluid retention in the body thus preventing appearance of oedemas with different etiology.

Adults and children above 14 years of age – 2 to 4 tablets daily, during meals.

It is recommended to take it continuously – 1 month.

individual intolerance to any ingredient, pregnancy and breastfeeding, increased nervous disturbances, taking the tablets late at night, increased blood pressure.
Prior to self-use, it is recommended to consult a physician first.

Product offered by "Zdravnitza". If you have pharmacy, health store or other commercial establishment on the territory of Bulgaria and the European Union, you can contact us to provide you with pricelist and terms of partnership accord. More information find in "Wholesale".

"Zdravnitza" is a registered trademark owned by "New S Net" LTD, Sofia, Bulgaria. Our products are 100% guaranteed quality and possess all the necessary certificates.