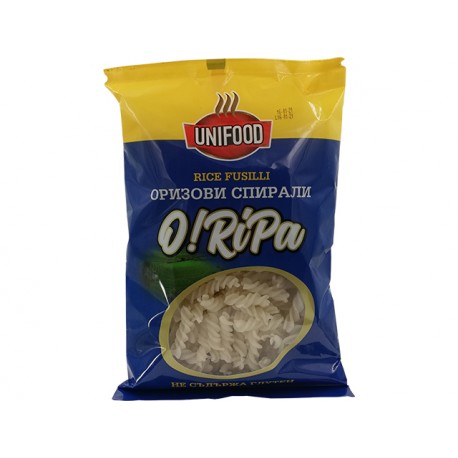 Rice fusilli have a pleasant aroma and combine great with any kind of sauce or topping. Gluten Free product.

Rice fusilli possess such a mild flavor that they make a good match for almost any type of sauce or topping, from mild chicken broth to a fiery Szechuan pepper dish. Beyond culinary benefits, one reason to choose rice penne is that they’re gluten-free. It also deliver nutrients in the form of fiber, zinc and iron.

1. Use 1 liter boiling water for 100 g of fusilli.
2. Put rice penne into boiling water and stir them occasionaly for well done.
3. Cook about 7-12 minutes and put them off in the bastket for drain off.
4. Add one tea spoon of vegetable oil to make penne non-sticky. Garnish ready fusilli with spices, tomatoes, sauce, chilli, vegetables, sea food or meat and serve.