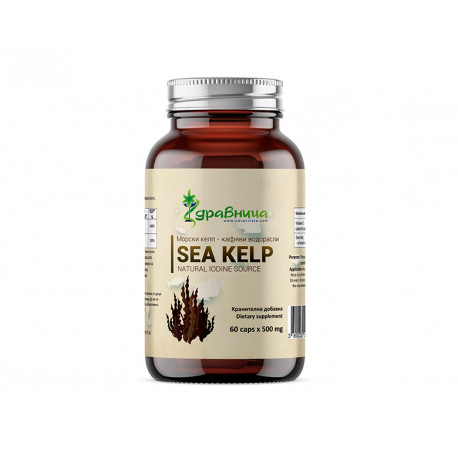 Sea Kelp with added vitamin C. Natural source of iodine and a number of micronutrients. Contributes to the normal functioning of the thyroid gland.

Kelp is a species of large brown algae that grows in shallow, nutrient-rich saltwater near the coast. Dried and ground to a powder, kelp algae became a popular dietary supplement and was used primarily to supplement the diet with iodine.

Kelp is a very rich source of all kinds of micro and macronutrients. Contains 46 minerals, 16 amino acids, 11 vitamins. The most important minerals in kelp are iodine, iron, potassium, phosphorus and calcium. The leading vitamins are niacin and vitamin A.

Kelp is an alkaline food and is very useful for maintaining the alkaline-acid balance in the body.

Kelp provides high radioprotective and detoxifying effect, and has the ability to remove heavy metals from the body, including mercury, lead and others.

Seaweed contains about 10 times more minerals than plants grown in the soil. Sea Kelp also has a number of proven health benefits. Below we present only a small part of them.

Iodine is one of the elements that is present in the body in the smallest quantities and belongs to the so-called trace elements. This with activating substances that are vital for the proper functioning of the body and a beautiful appearance.

The most important role of iodine is to participate in the production of thyroid hormones and especially T-3 (triiodothyronine) and T-4 (thyroxine). Both hormones are involved in regulating cell metabolism and organ development. The most severe complications of iodine deficiency are associated with the development of cretinism - a disease in which there is a sharp delay in physical and mental development. The other disease is hypothyroidism - when the thyroid gland does not produce enough hormones and thus disturbs the balance of biochemical processes in the body.

Daily iodine requirements vary according to a person's age and body condition. For adults and children over 18 years of age, it is recommended to take 150-200 micrograms of iodine per day. One capsule of the sea kelp of "Zdravnitza" contains exactly such a dose - 200 micrograms.

Sea Kelp contains a mineral called vanadium. This mineral is extremely useful for people with type 2 diabetes. Vanadium has an insulin-like effect while increasing its action. Vanadium is involved in the regulation of carbohydrate metabolism and cardiovascular activity, and also participates in the processes of bone and tooth formation, as well as in growth and metabolism. It plays an important role in increasing the activity of the immune system.

Sea kelp also contains fucoxanthin - one of the most common marine carotenoids, ahead of only astaxanthin. Futocoxanthin helps control body weight, which is especially important for people with diabetes. Futocoxanthin increases the production of omega-3 and DHA.

Sea Kelp is moderately rich in iron, which makes it a valuable product for preventing iron deficiency in the body, known as anemia.

The health benefits of the sea kelp of "Zdravnitza" do not end here. Regular intake of sea kelp also contributes to:
- improving cognitive abilities;
- improving the functioning of the nervous system;
- reduction of high cholesterol in the body;
- speeding up the metabolism and providing effective control over the appetite.

Dietary supplement is used as an adjunct to the diet, which contributes to the normal functioning of the thyroid gland.

As a dietary supplement, take 1 capsule daily with food.

Dietary supplement. Keep out of reach of children. Do not take by children under 18 years of age. Do not use by pregnant or breastfeeding women without consulting a specialist. Do not exceed the recommended daily dose. The product is not a medicine and does not replace a varied diet. 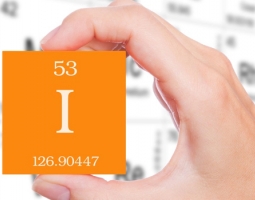 Daily needs of Iodine and risks of iodine deficiency

Iodine is one of the elements found in the body in the smallest amounts and belongs to the oligoelements. This with activating substances that are vital to the well functioning of the body.