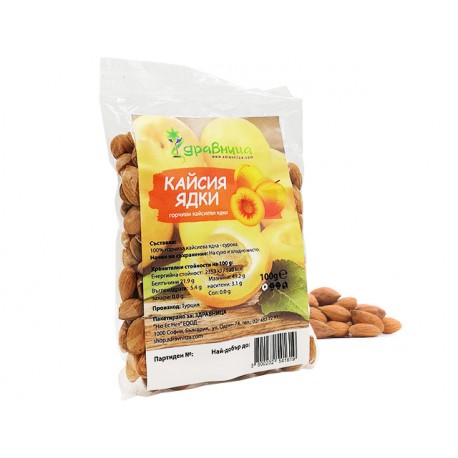 The apricot country is North-East Armenia. And so far in Central Asia, Dagestan, northeastern Armenia is a wild apricot. In the Himalayas it grows even at 4,000 meters above sea level. As a cultural species in Armenia, it is cultivated for 3000 years, from where its distribution begins - Persia, Asia Minor.

It was only in the 1st century that it came to Europe, but it grew for a long time only in the monastery and princely gardens. It was not until the 10th century that the Apennine peninsula spread to Germany and France, and later to America, Africa and Australia.

The apricot kernel composition is similar to that of the almond. It contains 19% protein, 53.5% fat, 4.5% carbohydrates, unsaturated fatty acids, phosphorus, iron, magnesium and vegetable fibers.

Apricot kernels are rich in omega-6 fatty acids, vitamins B15 and B17, A and E, niacin, dietary fiber, phytosterols and others. The energy value of 100 g of apricot kernels is between 500-700 kcal. Apart from the beneficial substances, apricot kernels contain the dangerous glycoside amygdalin.

It is believed that the curative effect against colds has apricot kernels. 20 nuts are crushed, peels are peeled, dried and crushed into powder. It is consumed 3-4 times a day with 1 teaspoon of milk or tea.