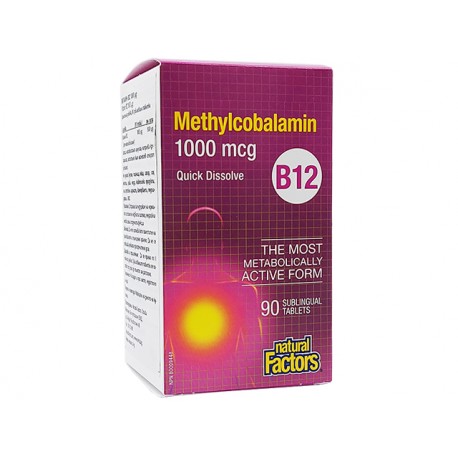 Vitamin B12 1000 µg (Methylcobalamin) compensates for the deficiency of B12 in the daily diet and contributes to the normal hematopoiesis and absorption of iron. It helps the normal flow of oxygen in the blood, due to which the organs and tissues return to their proper functioning.

Support the brain, nervous function and mental resilience
Supports the production of DNA and RNA. Promotes the synthesis of neurotransmitters important for learning and memory processes. Contributes to the delay of cognitive decline, which appeared as a result of advancing age, severe stress and others. Strengthens the central nervous system, and reduces the risk of psychosis, depression and severe memory impairment in older patients. Promotes the acceleration of nerve cell growth, increase vitality and energy, and helps restore alertness and concentration.

Vitamin B12 in the form of methylcobalamin - the biologically active form of B12. It has exceptional activity immediately after absorption, unlike other forms.

Vitamin B12 1000 µg (Methylcobalamin) is a source of B12 extracted from plant sources, which makes it an excellent solution for vegans and vegetarians! Fast-dissolving sublingual tablets have a much higher digestibility than capsules and regular tablets!

Contributes to maintaining the normal state of the nervous system, energy metabolism and heart function.

Take 1 tablet daily. The sublingual tablets are placed under the tongue until completely melted.

Do not use as a substitute for a varied and complete diet. Do not exceed the recommended daily dose.