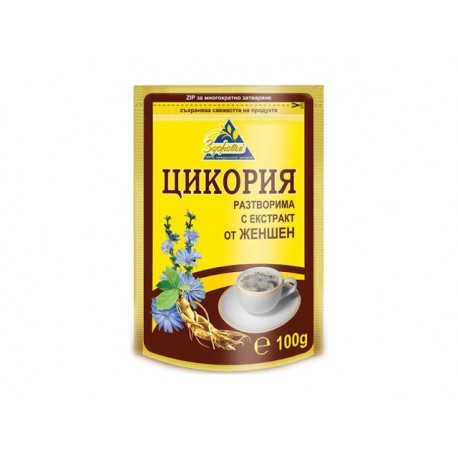 Used as a substitute for coffee. It does not contain caffeine. The combination of chicory and ginseng has many healthful properties.

Ginseng is a powerful immune stimulator, tones and has a general strengthening effect. Ginseng lowers blood glucose and cholesterol, thus reducing the risk of diabetes and cardiovascular diseases. It possesses antiviral effect by neutralizing the viruses of the herpes group and decreasing the virulence of hepatitis viruses and HIV.
Ginseng roots are recommended even in depression, decreased performance, irritability, decreased potency to aid recovery after serious diseases.

Preparation: 1-2 teaspoons dissolved in 150 ml of water. According to taste flavored with sugar, milk, cream.