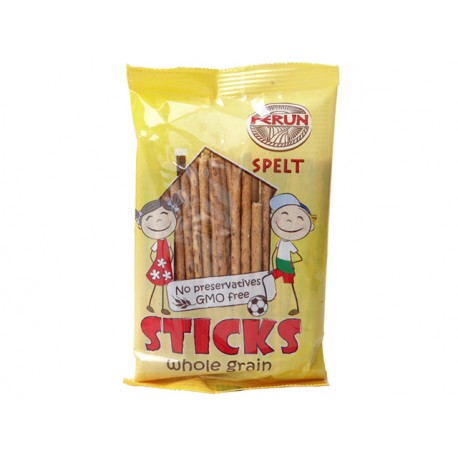 Spelt wholegrain sticks "Perun" are an excellent choice for a quick bite to eat during a busy day.

Spelt, also called spelta and dinkel, is a kind of ancient wheat. It was a staple food in parts of the Middle East and Europe from the Bronze Age to the Middle Ages.

Today, spelled is perceived as a healthy diet, as it has a higher percentage of wheat protein, as well as a large amount of fiber, minerals and vitamins. There are almost 2 times more vitamin A and B vitamins, fat, phosphorus and protein. It contains gluten, in large amounts, but it is different from ordinary wheat, both in terms of gliadin and glutenin, and as a protein matrix that is more readily soluble in water and more easily absorbed by the digestive system.

Spelt wholegrain sticks "Perun" are an excellent choice for a quick bite to eat during a busy day.

Spelt grain "Perun" is grown on its own field and no preservatives and enhancers have been added to it.

The content of salt and gluten is due to their natural presence in the grain. May contain traces of other cereals.