Brewer's yeast powder is a superfood - an excellent source of protein, minerals and B vitamins. Does not contain GMO and technological additives.

Brewer’s yeast is an ingredient used in the production of beer and bread. It is made from Saccharomyces cerevisiae, a one-celled fungus. Brewer’s yeast has a bitter taste.

Brewer's yeast powder is a superfood - an excellent source of protein, minerals and B vitamins.

Gastrointestinal tract
The probiotic properties of brewer's yeast make it an excellent means of preventing diarrhea. Consumption of brewer's yeast powder has a beneficial effect on other health problems of the digestive tract, including:
- diarrhea caused by antibiotics or a travel;
- irritable bowel syndrome;
- colitis;
- lactose intolerance.

While the exact mechanism of action remains unexplained, proponents claim that brewer's yeast increases the immune response in a way that helps the body "treat itself." There is some evidence of this, albeit weak.

There is also some evidence that brewer’s-yeast-based supplements may reduce the severity of upper respiratory tract infections in those who are already ill.

Diabetes
Brewer's yeast contains mainly complex sugars and is suitable for use in patients with diabetes. Some studies show that chromium supplements can help people with diabetes control their blood sugar levels because they either don't produce enough insulin - a hormone needed to convert sugar, starch and other foods into energy - or they can't use insulin that their bodies produce. Chromium can lower blood sugar levels, improve glucose tolerance and reduce the amount of insulin needed. Because brewer's yeast is a rich source of chromium, scientists believe that its consumption can help treat high blood sugar.

High cholesterol
Several studies have shown that brewer's yeast can help reduce LDL ("bad") cholesterol in the blood and increase HDL ("good"). It is an excellent means of regulating cholesterol, a natural antibiotic that controls bacteria that can be harmful to the human body.

According to research, polysaccharides help in cell regeneration and have an antiviral effect.

Nervous system
Vitamin B plays an important role in the normal functioning of the nervous system and increase concentration. Its absence slows down the conduction of electrical signals of nerve cells to the whole body. Especially vitamins B1 and B6 have an extremely positive effect on the work of brain cells.

Weight loss
The high protein content of brewer's yeast helps to lose weight. Protein provides more energy to the body, and chromium reduces the fat content in cells. However, some people take brewer's yeast in the hope of gaining weight.

For direct consumption in combination with water, fruit and vegetable juices, yogurt or other liquids.

Brewer's yeast powder can be used as an additive to salads, soups, main dishes. Brewer's yeast has a specific, slightly bitter taste. 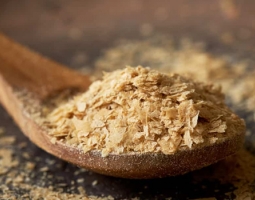 Why is brewer's yeast useful for the whole body?

Natural and high-quality brewer's yeast is produced from brewer's yeast, which is obtained only from natural products malt, hops and water.