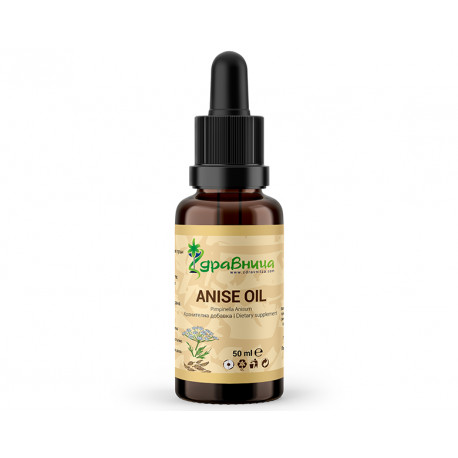 Anise oil of "Zdravnitza" helps digestion, reduces bloating and has a pronounced expectorant effect. Natural product for internal use.

Anise is an annual plant with a 30-60 cm tall stem. The inflorescence is a complex canopy. The flowers are white. The fruits are 3-5 mm long, ovate to ovate-oblong. It blooms in June-July.

The fruits (seeds) and the oil obtained from them are used for medicinal purposes.

Anise seeds are known as a strong spice. The plant is a key ingredient in the production of alcoholic beverages such as ouzo and absinthe, as well as in a number of culinary products.

Anise seeds have been used in cooking since ancient Egypt. The Egyptians consumed aniseed foods to aid digestion and relieve stomach pain. Anise is a traditional herb in India, where it has also been used as a remedy for stomach problems. The ancients also used anise as a breath freshener.

Anise oil has a strong antibacterial and antifungal effect. Anise oil of "Zdravnitza" is an excellent helper in the fight against Escherichia coli, streptococcal and staphylococcal bacteria.

Anise oil is also used for colic (even in infants) and bloated stomachs. Anise oil has a beneficial effect on food poisoning associated with the disorder.

Respiratory support
Anise oil of "Zdravnitza" has a pronounced expectorant effect. This oil strengthens the functions of the mucous membranes and quickly clears the airways. Anise oil helps to remove secretions from the bronchi.

Taken orally, anise oil is well and quickly absorbed, mainly in the small intestine. Through the bloodstream, the oil quickly reaches the pulmonary alveoli, where it exhibits its secretolytic and expectorant action.

Blood health
Coriander oil of "Zdravnitza" has a beneficial effect on cleansing the blood, thus acting as a detoxifier. Coriander oil helps remove uric acid, heavy metals and other toxins from the body.

Relieves the symptoms of PMS
Anise oil of "Zdravnitza" can reduce the frequency and severity of hot flashes in PMS. Taken internally, anise oil "mimics" the effects of estrogen in the body.

More health benefits
The useful properties of Anise oil of "Zdravnitza" do not end here. The oil can also be used as a natural helper in:
- Diabetes;
- Insomnia;
- Neurological disorders (such as epilepsy).

External use of anise oil (ie directly on the skin) helps the body fight psoriasis and lice.

Many systematic studies examined the efficacy of milk thistle to treat liver diseases, in particular, alcoholic liver disease and hepatitis B and C. Prolonged use of Milk Thistle oil contributes to faster resolution of symptoms retention of bile and reduction in indirect bilirubin. It is scientifically proven that the milk thistle oil has antioxidant, anti-inflammatory and antioxidant action.

The food supplement is used as an adjunct to the diet, which:
contributes to the normal functioning of the gastrointestinal tract.

As a dietary supplement, take 5 drops a day with water or food.

Dietary supplement. Keep out of reach of children. Do not use by pregnant and lactating women. It can be used by children only after consultation with the pediatrician. Do not exceed the recommended daily dose. Do not use as a substitute for a varied diet.

Packaging: 50 ml in a dark glass bottle with a dropper 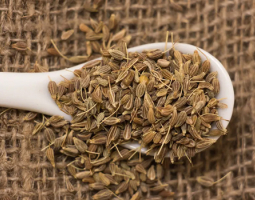 Anise - a natural remedy for a number of health problems

Anise seeds seem to be the most popular folk remedy. Its characteristic aroma is part of the bouquet of popular drinks mastika, ouzo, aniseed brandy, arak.