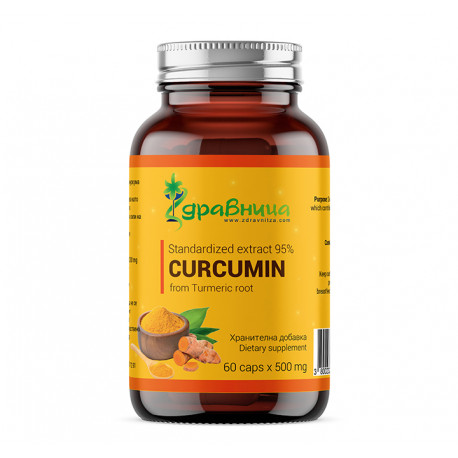 The curcumin of "Zdravnitza" is a standardized extract of turmeric root with pronounced anti-inflammatory, detoxifying and antioxidant action. 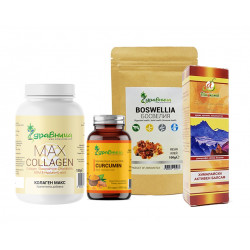 Turmeric (Curcuma longa) is a perennial herbaceous plant of the genus Turmeric, reaching a height of 1 meter, with a strongly branched rhizome. The root of the plant is used in both medicine and cooking. It has a strong yellow coloring effect due to the 2-5% content of the pigment curcumin in the root and specific taste, it also contains 5% essential fatty acids.

Curcumin was isolated in 1815 from the roots of the turmeric plant (Curcuma Longa), used as a spice and medicinal plant in Indian folk medicine for more than 5,000 years.

Curcumin is a component in healing recipes for many afflictions - they rely on the high content of curcumin - a powerful antioxidant and component with anti-aging, anti-inflammatory and antiseptic effect.

Curcumin is a natural anti-inflammatory compound. Scientists believe that chronic inflammation plays a major role in almost every chronic disease, so it is good to do what is possible to avoid these processes.

Curcumin has a strong anti-inflammatory effect. It blocks NF-Kb molecules that enter cell nuclei and become inflamed, experts say. Without going into details, the inflammation is extremely complex. The important thing in this case is that curcumin is a biologically active substance that fights inflammation at the molecular level.

Curcumin as a powerful antioxidant can neutralize free radicals and increase the activity of antioxidant enzymes in the human body.

Curcumin also stimulates brain neurotrophic activity. In the past, it was thought that after early childhood, neurons could not divide and multiply. However, it is now known that this is not the case. Neurons are able to form new connections and, in some areas of the brain, to multiply. One of the main drivers of this process is brain neurotrophic factor, which is a type of growth hormone. It functions in the brain. Common brain disorders associated with low levels of this hormone are depression and Alzheimer's disease. Interestingly, curcumin has the ability to increase BDNF levels in the brain.

Alzheimer's disease is the most common neurodegenerative disease in the world and the leading cause of dementia. Unfortunately, there is still no effective treatment for the disease. It is known that its inflammation and oxidative damage play a role in the disease, and curcumin fights both. In addition, a key feature of Alzheimer's disease is the accumulation of protein bonds called amyloid plaques. And curcumin can help clear these plaques.

Arthritis is becoming an increasingly common problem. There are several different types, most of which involve inflammation of the joints. In studies in people with rheumatoid arthritis, curcumin was extremely effective in relieving symptoms. Curcumin is an invaluable helper in this case as well.

Curcumin has countless positive effects on the whole body, including:
- Strong detoxifying and antioxidant action, cleansing the body of toxins.
- Positive effect on the digestive system and metabolism.
- Has anti-inflammatory action.
- Supports the immune system during exercise.
- Improves the cleansing forces of the liver and restores its good functions.
- Accelerates metabolism, thus achieving a slimming effect.
- Contains polyphenols and thus helps to burn fat faster and break down fat cells.
- Turmeric has a positive effect on warming the blood, stabilizing blood sugar and lowering cholesterol.
- Has an analgesic effect in arthritis.
- Antibacterial and antifungal action.

Dietary supplement is applied as an aid to the diet which:
- contributes to strengthening the body's natural defenses.

As a dietary supplement, take 1 capsule in the morning and evening (2 capsules daily) before meals.

Dietary supplement. Do not take by children under 12 years of age. Do not use by pregnant or breastfeeding women. Do not exceed the recommended daily dose. The product is not a medicine and does not replace a varied diet. 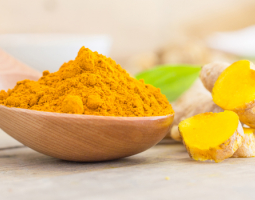 Curcumin is the main active ingredient in turmeric. It has powerful anti-inflammatory effects and is a very powerful antioxidant. Turmeric has been used in India for thousands of years as a spice and medicinal herb. 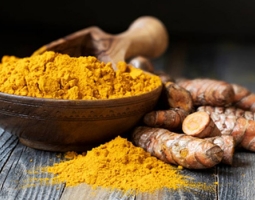 According to Eastern folk medicine, dried turmeric root has many useful properties. It removes toxins, warms and purifies the blood. It also cleanses the body's energy channels (meridians).