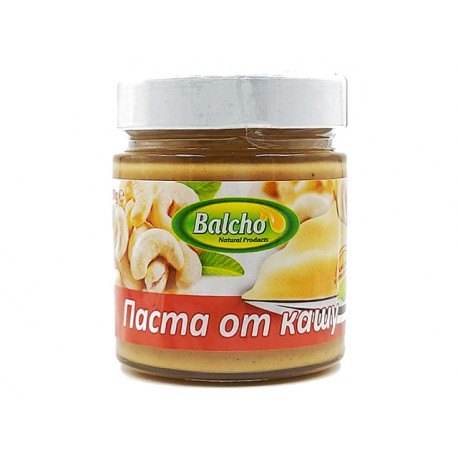 Cashew paste (cashew tahini) is suitable for direct consumption or use in various culinary products. Does not contain preservatives. Suitable for diabetics.

Cashews (Anacardium occidentale; syn. Anacardium curatellifolium A.St.-Hil, also known as Indian peanut) is a tree like Anacardiaceae. Originated in Brazil by Portuguese explorers brought the tree in other countries. Today it is present in Mozambique, Tanzania, Kenya, India and Brazil.

The true fruit of the tree grows on the top of cashew-apple. It has the shape of a kidney and a first of the tree grows, and then the handle is formed apple. In the fruit has a single seed and, although this is the correct botanical term, everyone calls inside the fruit cashew nut. Sometimes more than one cashew nut growing on an apple.

Cashews is wrapped by a double shell because the treatment process is long and complicated. First the fruit is baked into the pod to be able to break. Then only remains wrapped in zip nut that must be removed by hand. This is one reason for the high price of cashew nuts.

The cashew nut is rich in magnesium and phosphorus. Magnesium plays an important role in strengthening bones and activity of enzymes. In cashews contain iron, which is an important part of hemoglobin in the composition of red blood cells. It has a low glycemic index (22 +/- 5) and low-glycemic load (2.86 / 50 g). This makes it a recommended part of the diet of overweight people and diabetics.

The cashew nut is rich in vitamins A, B2, B1. It found more protein, carbohydrates and iron. This makes these nuts in a suitable supplement for every diet.

The consumption of cashew recommended for maintaining fitness programs. One of the most valued features of cashews is its ability to eliminate cancer and aging.

The paste of cashew stimulates stimulates the production of the main pigment melanin in the skin and hair. The consumption of cashew paste normalize sleep disturbances in postmenopausal women.

For direct consumption or use in a variety of culinary products. Stir before serving.

Separation of fat is a natural process.

Can be used by diabetics!