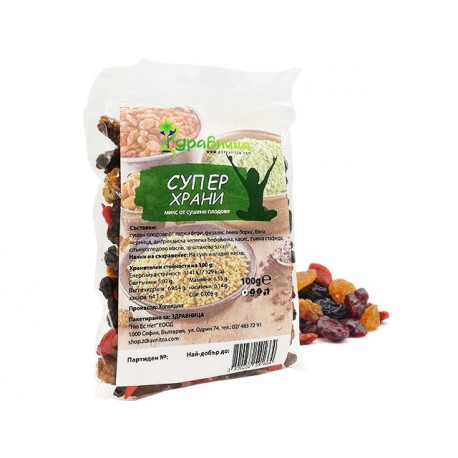 Goji Berry:
Since ancient times, Goji Beri is highly valued and widely used in Chinese traditional medicine. The earliest evidence of the fruit dates back to the lands of the Tibetan Himalayas and northern China, where it was grown in 5000 BC. Today, most plantations are located in Southeast Europe and Asia. In China, these little reddish fruits are known as centuries-old food.

Inca Berry
Inca Beri is a superfood, which is gaining increasing popularity and deserving. This plant comes from the Andean region of Peru, with its healing properties discovered by the Incas, so it is often called the "Inca Fruit." This fruit is rich in vitamin C, so it has a sour taste. It is important for blood vessels and cartilage to maintain levels of dopamine and peptide hormones. There is also a high content of phosphorus, beta-carotene, vitamin A, proteins (16%) and vitamin B12, which helps to maintain cellular metabolism.

Cranberry
In addition to bright colors and a very sour flavor other than other fruits, cranberry is extremely rich in vitamins that are very powerful antioxidants. Cranberries have a rich variety of phytonutrients and other nutrients. They are also perfectly balanced and easily digested.

Black currant:
Black currant is a source of many nutrients and vitamins. In addition, currants are very low in calories - 30 kcal in 100 g. There is a large amount of vitamin C in the fruits and leaves of the black currant, which is enough for the daily needs of the body. For this purpose, only 20 fruits per day are sufficient.

Raisin:
In ancient Greek documents, the healing properties of the raisins are mentioned, they have been given to feed the exhausted people. Raisins are so useful that they even help with herpes. Also, raisins are a good natural remedy against dysentery, kidney problems and bladder problems.