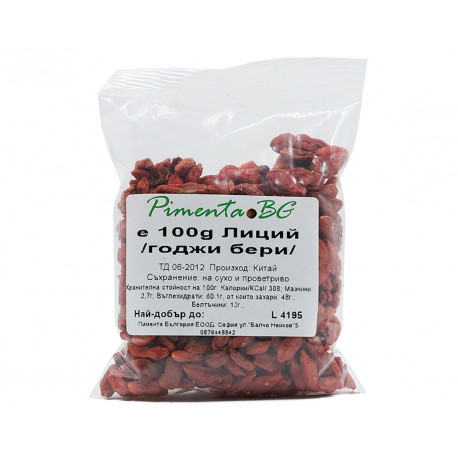 Since ancient times, the goji berry plant has been highly valued and widely used in Chinese traditional medicine.

Since ancient times, the goji berry plant has been highly valued and widely used in Chinese traditional medicine. The first information about the fruit dates back to the lands of the Tibetan Himalayas and Northern China, where it was grown as early as 5000 BC.

Today, most plantations are located in Southeast Europe and Asia. In China, these small reddish fruits are known as the food of centenarians.

Goji berry is also known as lycium and is among the favorite foods of Madonna, Sting, Mick Jagger and Kylie Minogue.

Polysaccharides - perform a number of functions, including improving the structure of the intestinal epithelium, increasing the absorption of minerals, regulating the level of glucose in the blood, lowering the pH level, thus reducing the risk of colon cancer, stimulating the activity of the immune system. Polysaccharides also have antioxidant properties and antiaging effects.

Betacarotene – a carotenoid found in orange-red foods such as pumpkin, carrots, salmon and goji berries. Beta-carotene is an essential element in the synthesis of fat-soluble vitamin A, which is related to the normal development of the body, good vision, cell structure, health of bones, teeth and skin.

Zeaxanthin – a carotenoid that is important as a pigment in the retina.

Vitamin C - Goji berries have a high content of vitamin C (20 milligrams per 100 grams) - the same content as oranges.

Selenium - has a pronounced antioxidant effect, and its content in goji berries is equal to the required daily intake.

Iron - iron is involved in many metabolic processes, but above all it is an indispensable building block of hemoglobin. Lack of iron in the body leads to iron deficiency anemia. Goji berry is believed to be among the plants with the highest iron content.

Zinc - Goji berries can be a source of 20% of the required daily dose of zinc, which in turn is involved in the synthesis of proteins, DNA and more than 100 enzymes. It is a key factor in a number of basic cellular functions.

Calcium - the main building material of teeth and bones, an element with numerous functions, important for heart activity, neuroconductivity and respectively muscle activity, hormonal and enzyme exchange, as well as for the transfer of substances through cell membranes. Goji berries contain between 8-10% of the recommended daily dose of calcium.

Potassium – In addition to being an electrolyte and enzyme co-factor, potassium used as a replacement for sodium in our diet can permanently lower high blood pressure.

The saturation of goji berries with micronutrients and phytochemicals makes it a food supplement with a particularly high nutritional value and a positive effect on cardiovascular and inflammatory diseases, some forms of cancer, diabetes, premature aging, memory deficits, degenerative processes related to vision, lung problems; tiredness, fatigue, insomnia, dizziness and tinnitus. On top of that, the superfood helps with longevity and boosts libido as a natural aphrodisiac.

Does not contain harmful substances or technological additives.

The recommended daily dose of goji berries is about 30 g (not a suitable fruit for children under 5 years old). With this minimal amount, however, our body gets more vitamin C than oranges, more beta-carotene than carrots and more iron than a serving of red meat.