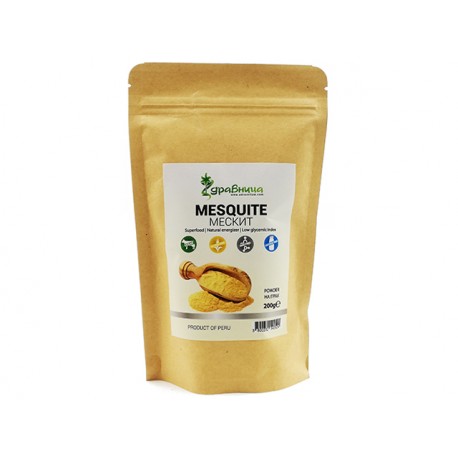 Mesquite powder is a natural high protein sweetener. The taste is described as light, slightly sweet, with subtle notes of caramel and molasses.

Mesquite is a tree that is part of the leguminous (legume) family. It grows in areas with dry climates such as parts of South America and the southwestern regions of the United States. Mesquite trees have a long root and use underground sources of water. Therefore, irrigation or the use of fertilizers and chemicals are not required for cultivation.

Mesquite wood produces pods that are ground to reach the final product - Mesquite Powder (Mesquite flour). The pods of the mesquite trees are rich in protein and have high nutritional value. The taste is described as light, slightly sweet, with subtle notes of caramel and molasses. Because of these qualities, powder mesquite is often used as a natural sweetener.

Mesquite has the ability to balance blood sugar, making it a great option for diabetics. The glycemic index of mesquite is 25 (much lower than white sugar) with a high percentage of dietary fiber. These factors allow the mesquite to be absorbed much more slowly than a number of cereals, preventing drastic changes in blood glucose levels.

Mesquite is used to make a number of medicines or the plant itself is used as a medicine mainly for the treatment of wounds, eye problems and skin diseases. The good effects that it has on the digestive system are also known. Mesquite also helps with insect stings and mild infections.

Powder mesquite can be used as a food substitute in a number of baked goods. Replace half of ordinary flours in mesquite recipes, eliminating other sweeteners in recipes depending on personal preference. The ratio starts with 25-30% mesquite powder.

Powdered mesquite can be used in the same way as an additive to sauces and drinks. Mesquite is an excellent addition to stews, soups, as well as to sweeten tea, coffee and smoothies. Mesquite powder can be used as a supplement to raw foods.

It can be used to make energy bars, muesli and raw desserts.