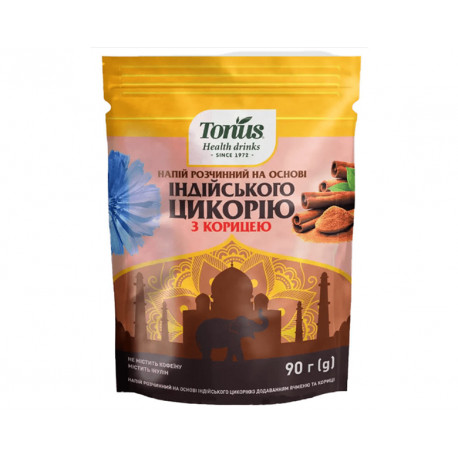 Instant drink based on chicory and barley with added cinnamon. Natural substitute for coffee. Caffeine free.

Nowadays, we can often meet people who love coffee, but can not accept it for various health reasons. The solution is extremely easy - we replace coffee with its natural substitute - an instant drink based on chicory and barley with added cinnamon.

Soluble chicory of granules has a rich taste with bitter notes. The plant is known as a useful alternative to coffee without containing caffeine.

A warm beverage of soluble chicory of granules is recommended in a state of constant fatigue (asthenia), to improve mental abilities and increase in concentration.

Cinnamon contains many substances and compounds in its composition - polyphenols, antioxidants, as well as some unique chemicals such as cinnamaldehyde and cinnamic acid, which are attributed to various potential health benefits.

Pour 2 tsp of drink with 150 ml hot water or milk. It can be sweetened with a sweetener of choice.