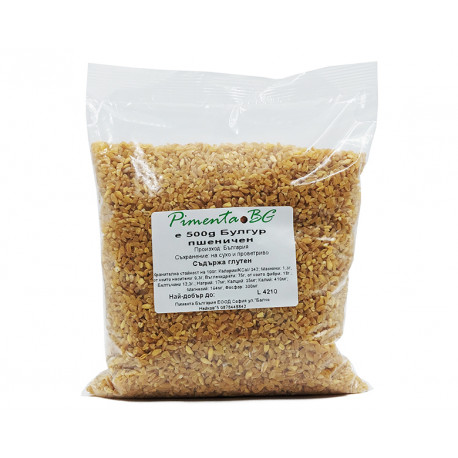 Bulgur wheat has a high nutritional value, suitable for both savory and sweet dishes, easy to use because it cooks quickly.

Wheat is a major cereal crop used to make bread. It was originally grown in the Fertile Crescent region, located in the Middle East, but gradually spread throughout the globe.

Wheat was an important factor that enabled the creation of highly urbanized societies at the dawn of human civilizations, as it was one of the first crops capable of being cultivated on a large scale, giving high yields and being stable in long-term storage. Wheat is a major source of plant protein in the human diet because it is characterized by a higher protein content than corn, rice and other related crops. It is estimated that about 70% of the world's population consumes wheat bread. Wheat germ is an important source of vitamins, mineral salts and proteins, and as such is used in a number of culinary products.

The grain of wheat is the part of the plant that is used for food. After milling the grain, the resulting product is wheat flour, which is used to make various types of bread, biscuits, spaghetti, couscous and a number of other pasta products.

Bulgur is made from wheat grains that are first steamed, then dried and crushed. The resulting product has a high nutritional value, a universal taste, suitable for both salty and sweet dishes, easy to use because it is cooked quickly and can be easily adapted to different culinary recipes as a substitute for rice.