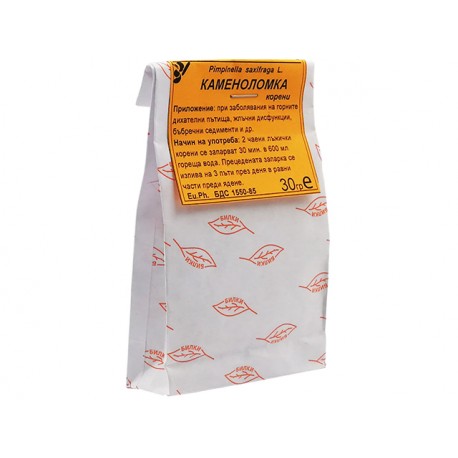 Burnet-saxifrage - dried root can be used as an aid in: angina, bronchitis, pharyngitis, kidney and gallstones.

Pimpinella saxifraga is a plant of the family Umbelliferae a native of the British Isles and temperate Europe and Western Asia. It is neither a Burnet, which its leaves resemble, nor a Saxifrage although it has a similar herbal effect as a diuretic.

The plant makes up a large part of the turf in some of southern England's chalk downs. It is highly nutritious for sheep and cattle, and in the past was cultivated on calcareous soils for fodder.

It grows in the dry deserts of the foothills. It has a high stem with rounded leaves. Blooms in July-August.

The roots of the plant are used, which after removal are cleaned, washed and dried in the shade or in the dryer.

Method of preparation: 2 tablespoons of herb soak 30 minutes in 500 grams of hot water. Drain and drink 3 times a day 120 grams before eating.