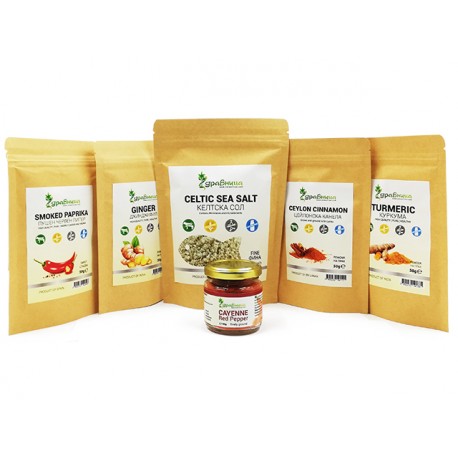 Turmeric (Curcuma longa) is a perennial plant of the genus Turmeric reaching a height of one meter, with a highly branched rhizome. The root of the plant is used as in medicine and in cooking. It has a strong coloring effect in yellow due to the 2-5% content of pigment in turmeric root and specific taste, and comprises 5% essential fatty acids.

The products of turmeric are used primarily for anti-inflammatory activity of curcumin. Operate successfully in problems with bile and digestive disorders; soothe the intestinal peristalsis and excessive flatulence in the intestines. Assist in balancing the digestion and absorption of food components.

Ginger (Zingiber officinale) is a plant whose roots are used in China and India since ancient times. In Europe spread in the 13th century thanks to Marco Polo. Initially used mainly in medicine.

Ginger is a powerful antioxidant which is commonly used in various types of inflammation, including rheumatoid arthritis. Its roots play an important role in the treatment of osteoarthritis and rheumatoid arthritis. Surveys show that people who take ginger for a long time, feeling reducing pain and improving joint movement. Ginger limited swelling and accompanying inflammation.

Gray (Celtic) salt is mined on the shores of Bretagne - Northern France, an area prohibited from shipping. Salt is obtained in the traditional way by drying in the sun, which allows to preserve all the invaluable qualities. It contains 84 minerals and trace elements.

In addition to supplying the body with all the necessary minerals, the Celtic salt has specific properties that are particularly useful for detoxification and rejuvenation. Contains organic iodine.

The Celtic salt has the most magnesium of all salts known in the world, which makes it very useful for people with heart problems and high blood pressure. Promotes balanced secretion of vital hormones.

Hot pepper (Cayenne) certainly deserves much more attention because of the many health benefits associated with eating it. This very spicy herb has many advantages, such as supporting the cardiovascular system; prevention of stomach ulcers; support the digestive system and fight inflammation.

Cayenne pepper is named after a city in French Guiana where it is grown. This is the hot chili pepper from the family of peppers, sibling of jalapeño and paprika. The plants are no more than a meter and a half height and are usually grown in a tropical environment because they need moist and warm soil for optimum results. These peppers are very rich in nutrients and are an excellent source of vitamins, especially vitamin A, vitamin E, vitamin B6 and vitamin K.

Smoked paprika is one of the most popular spices used in various national cuisines and is unique with its taste, aroma and color. Smoked pepper is made by grinding sweet or hot peppers of the Capsicum Annum family. This spice comes from the West Indies and South America, and today it is mainly produced in Spain, Hungary and South America.

The color of the spice can vary from deep red to orange red and is usually used to sprinkle on dishes such as goulash, pizza, fries and more. Smoked pepper is national spice in Hungary.

In the humid climate of Extremadura, Spain does not practice drying peppers in the sun because of the risk of catching mold. Instead, it is dried in special two-storey dryers. The first floor maintains a slow fire of moist oak trees (for lower temperatures and more smoke), which dries and fumes peppers located on wooden floors on the second floor. Peppers are dried and smoked for 10 to 15 days, turning by hand daily. This traditional method of smoky drying, slow and gentle, ensures that the levels of caratenoids in the peppers are maintained. This is how the unique Spanish smoked pepper was born.