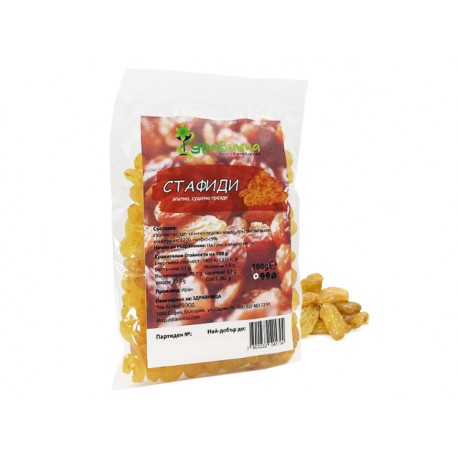 Raisin is a grape fruit that is dried after being picked up by the plant. Raisins have a taste that resembles fresh grapes but are sweeter.

Raisin is a grape fruit that is dried after being picked up by the plant. Raisins have a taste that resembles fresh grapes but are sweeter. They are produced in many regions of the world. Raisins can be eaten raw or used in cooking, baking and brewing.

Raisins and dried grapes have been known in ancient times, and for the first time dried grapes are mentioned in the Old Testament. Ancient frescoes show that it was used for consumption and decoration. Ancient Rome has been used as a barter unit and even as a reward for winners in sports tournaments.

In ancient Greek documents are mentioned the curative properties of raisins, they have been given to nourish exhausted people.

Raisins have a beneficial effect on:
- Cardiovascular diseases;
- Anemia;
- Bronchitis;
- Pneumonia;
- Cough;
- Diseases of the bile;
- Acidosis
- Joint illnesses and others.

Raisins are so useful that they even help with herpes. Also, raisins are a good natural remedy against dysentery, kidney problems and bladder problems.

We should also note that the sugar content, namely glucose and fructose, in raisins is eight times higher than in grapes. So instead of candy, it is better to eat raisins. Antioxidants contained therein suppress the growth of bacteria, which are one of the main causes of cavities.