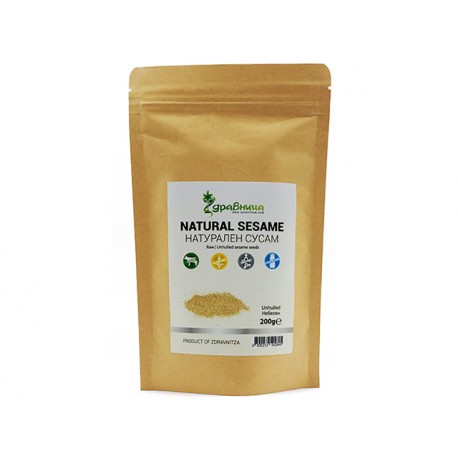 Unhulled natural sesame seeds are an excellent helper to lower cholesterol and improve digestion. Natural source of minerals and fiber.

Sesame is an annual herbaceous plant of the sesame family. There are 12 types of sesame. Homeland of sesame is Africa. It is grown in North Africa, the Mediterranean, etc .; most in India, China, Pakistan.

Sesame seeds contain 53-63% oil, 21% protein and 21% carbohydrates. They are used for food, in the food industry, the medical industry, in confectionery and others.

Sesame is the main product in the production of halva, and ground (known as tahini) is used in the Middle East and the Mediterranean. It is used to season hummus, kebab sauces, most often mixed with lemon and garlic in bread sauce - a popular Arabic appetizer mezze.

Sesame seeds are not only an exceptional source of copper and manganese, but also a very good source of magnesium, calcium, iron, phosphorus, vitamin B1 and dietary fiber. In addition to these valuable minerals and vitamins, sesame also contains two unique ingredients - sesamin and sesamolin. Both substances belong to the group of so-called lignans, which have cholesterol-lowering and vitamin E-increasing effects. Sesamin protects the liver from the adverse effects of oxygen.

Relief in rheumatoid arthritis
Copper, which is found in sesame seeds, is known for its beneficial effects in reducing the pain and swelling caused by rheumatoid arthritis. The effectiveness of copper is due to the fact that this trace element is important in a number of anti-inflammatory and antioxidant enzyme systems. Copper plays an important role in the activity of lysyl oxidase - an enzyme that is needed for the binding of collagen and elastin, which are a major part of the structure of bones, joints and blood vessels.

Lower cholesterol levels
The phytosterol compounds in sesame seeds have a chemical structure very similar to cholesterol. Frequent consumption of hulled sesame reduces the levels of bad cholesterol in the blood, improves the immune response and reduces the risk of some cancers.

Sesame seeds are one of the richest sources of phytosterols. Studies show that sesame contains 400-413 mg per 100 g. For comparison, well-known seeds such as sunflower seeds contain 270-289 mg of phytosterols, followed by pumpkin seeds - 265 mg per 100 g.

For good digestion
Due to its high fiber content, hulled sesame seeds maintain the health of the digestive system and colon. Fiber helps the smooth functioning of the intestines, thus not facilitating the expulsion of waste from the body and relieving constipation.

As an addition to dishes, soups, side dishes and more. Can be added to shakes and smoothies.