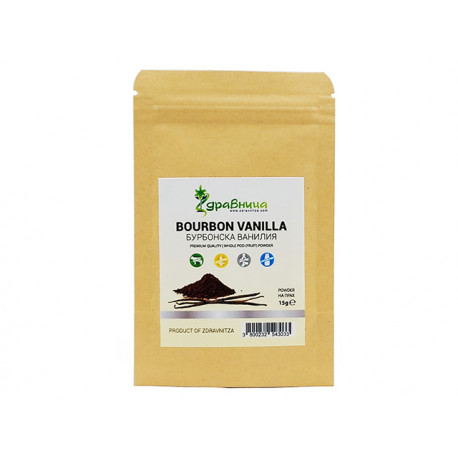 Bourbon vanilla has a high content of vanillin and a very strong aroma that is immediately recognizable and is a great addition to any recipe.

Vanilla is the only edible member of the Orchid family, which many consider the most beautiful flowers in the world. The spice of the same name is extracted from some species (mainly Vanilla planifolia). The name comes from the Spanish word vainilla, which means sheath of a small sword.

Vanilla was known and revered by the Aztecs, who made a special drink from it - a mixture of cocoa beans, vanilla and honey, considered a powerful aphrodisiac. In the 16th century, vanilla was brought to Europe by the Spaniards.

Bourbon vanilla is grown in Madagascar and other islands in the Indian Ocean, including the Comoros and Reunion. The island of Reunion has given its name to this type of vanilla, as it was formerly known as "ÃŽle Bourbon". Bourbon vanilla is produced from the orchid V. planifolia. Bourbon vanilla has a high content of vanillin and a very strong aroma that is immediately recognizable and is a great addition to any recipe.

Bourbon vanilla is believed to be an aphrodisiac, precisely because of its enchanting scent. In the 18th century, married men were advised to drink a vanilla tonic to increase fertility and potency, and women were given it as a cure for depression and hysteria. In various herbal texts from the eighteenth and nineteenth centuries, it was referred to as a "nerve stimulant", preserves sleep, improves brain function, increases muscle energy and sexual strength.

More than 200 phytonutrients have been found in vanilla today.

Vanilla is known not only for its aroma, but also for a number of health benefits, including:
- improves the quality of sleep and fights insomnia;
- lowers blood pressure;
- stimulates brain activity;
- helps the body fight viral infections;
- has a beneficial effect on stress, tension and depression;
- reduces irritability and improves mood;
- promotes weight loss.

Can be used for culinary use. Use in small quantities to flavor sweet pastries, desserts and more.

Homemade vanilla extract:
Put 5 g of bourbon vanilla in a glass jar and pour 1/2 cup of vodka. Close the jar tightly and store for 6 weeks in a dark and cool place. Shake the jar every day. After that, the extract is ready for use. The shelf life of the finished product is not more than 18 months.