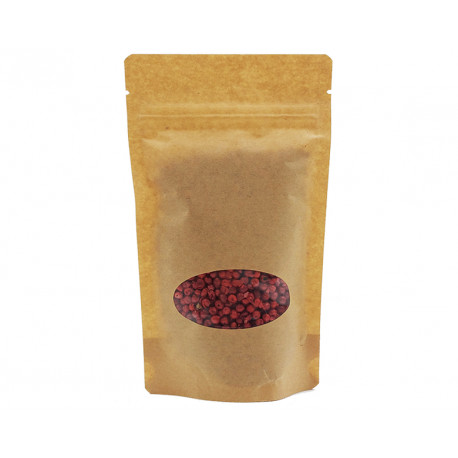 Rose pepper has a milder and sweeter taste compared to black pepper. It can be used as an additive to sauces, salads and dishes with seafood, meat, etc.

Rose pepper is the name of a spice obtained from the fruits of a species of American ash - Brazilian pepper (Schinus terebinthifolius).

The Brazilian pepper is a small flowering tree native to the tropical and subtropical regions of South America - Brazil, Argentina. The plant is not a pepper, but owes its name to the resemblance of its fruits to those of black pepper.

If you like to experiment in the kitchen and add new, different and bold flavors to your dishes, then you can safely try rose pepper. It is easily combined with many foods, but it is also very useful for health.

Rose pepper has been used as a stimulant and tonic. In a number of scientific works, the fruits of the Brazilian pepper are described as astringent, antibacterial, diuretic and antiviral, as well as a digestive stimulant.

Rose pepper are also used in the production of essential oils. For medicinal and cosmetic purposes, rose pepper is used with extreme care, as there is a risk of skin irritation.

Rose pepper has a milder and sweeter taste compared to black pepper. The fruits have a thin, brittle shell that can be easily grated and used as an aromatic and effective seasoning for fish or chicken dishes.

Its fruits are commonly used in cooking. In many countries it is added to various sweets and drinks. In addition, rose pepper is often added to sauces, salads and dishes with seafood, poultry, meat and fish. Some popular restaurants also serve asparagus that is seasoned with rose pepper.

Rose pepper are very delicate and crush easily. It is better to grind them with a knife or a spice mortar instead of a pepper mill. It is used to season sauces, cheeses, leafy salads and white meats. Its fruity aroma also makes it suitable for more exotic applications, for example in ice creams and chocolates.

Rose pepper can also be used entirely for food decoration as an impressive color sprinkle on ready-made dishes or in alcoholic drinks - gin, tequila. It is combined with garlic and lemongrass.

For culinary use. It can be used as an additive to various dishes and drinks.