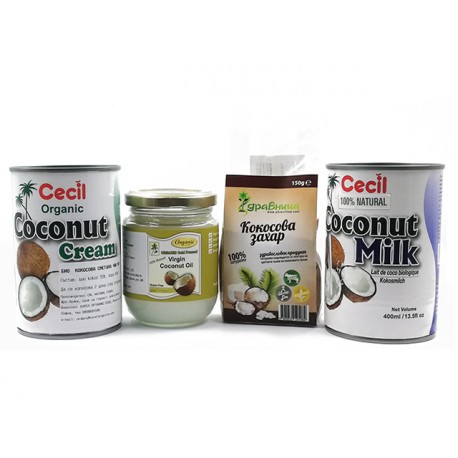 Coconut oil is a vegetable oil extracted the kernel of the coconut. In the tropics it is the main fat that enters the daily menu of millions of people. The most commonly produced by hot pressing the dried core coconut, and less frequently - by a process of cold pressing. This method of cold pressing is more gentle, which make it possible to retain all the advantageous properties of the oil.

Color of coconut oil is white to pale yellow and there is little or strong odor, but only slightly and a pleasant smell.

Cocoa butter is composed of 90% raw saturated fat which is in the form of medium chain fatty acids. These fats support the immune system mighty, well affect thyroid, skin and provide quick energy.

Coconut sugar is produced from the juice of cut flower buds of the coconut palm. It has been used as a traditional sweetener for thousands of years in the southern and southeastern regions of Asia where the coconut palm is very widespread. The world's largest producers of coconut sugar are the Philippines and Indonesia.

Coconut cream contains a greater amount of fat compared to kokosovoot milk. Cream of coconut is the better choice for "mixing" with coffee or tea, or if you want to make a banana bread or other pastries.

The addition of coconut cream into dishes and desserts makes food tasty and gives specific taste of coconut.

The technology for producing coconut milk is simple - coconut kernel is compressed first mechanically and then two or three more times after heating in warm water. Prepared more dense and less dense aromatic liquid, which is usually mixed and finally diluted with water until it reaches the consistency of the milk. The taste is also almost identical, but sweet and distinctive flavor of coconut.