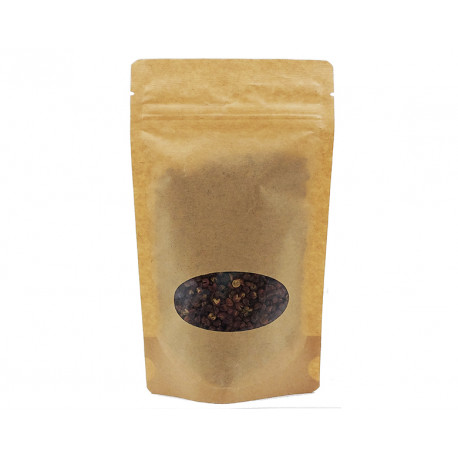 Szechuan pepper has a lemony flavor and does not have the sharp spiciness of black pepper. It is suitable for dishes with seafood, poultry, vegetables, pork.

Szechuan pepper is not actually pepper, but the husks of the seeds of a citrus tree. They have a lemon flavor and don't have the sharp spiciness of black pepper or chili, but offer a real flavor adventure. Szechuan pepper causes a tingling sensation on the tongue comparable to the effect of a fizzy drink or touching the terminals of a nine-volt battery. The numbing effect on the tongue stimulates the taste buds for other sensations and prepares them to perceive the spiciness of real pepper and chili. Chinese cooks believe that it dulls the burning heat of the chili.

Szechuan pepper is a key ingredient in many typical Chinese dishes. It is suitable for dishes with seafood, poultry, vegetables, pork. It increases its hotness during heat treatment. Most of the recipes recommend heating the Szechuan pepper in a pan over low heat until the seeds become fragrant and after they cool, grind them before adding them to the dish.

For culinary use. It can be used as an additive to various dishes and drinks.