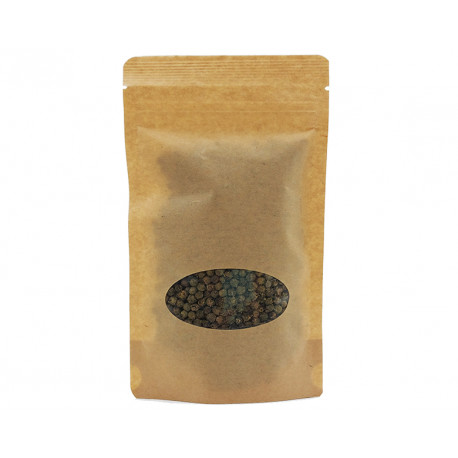 Green peppercorn is a spice for salad dressings, sauces, meat and vegetable dishes. Compared to black pepper, it has a milder taste and a fresher aroma.

Green Peppercorn is the fruit of the evergreen creeping plant /Piper nigrum/ of the Piper family. The plant originates from India, where it is still found growing wild in tropical jungles. Its long stems creep and wrap around the tall trees. In its natural environment, it can reach up to 15 meters in height. Cultivated in tropical regions. Black and white pepper are obtained from the same plant. The color of the spice is determined by the degree of ripeness of the fruits and their subsequent processing.

Green Peppercorn is harvested while the fruits are completely green. It has a strong aroma and, compared to black pepper, a milder taste. Used both dried and preserved in brine. It is suitable for salad dressings and sauces. It is often combined with other types of pepper and is available as allspice.

The spice is considered an aphrodisiac and is traditionally used in Indian medicine to awaken desire. Among gourmets, it is accepted that Green Peppercorn and strawberries represent a unique culinary pleasure that awakens the senses.

Antioxidant
Green peppercorn is rich in vitamins A and C, which are powerful antioxidants that help reduce the concentration of free radicals and the risks associated with damage from them.

Source of sodium
Green peppercorn is a dead source of sodium. Sodium is vital for the transmission of impulses and for muscle function. The movement of sodium creates electricity that helps nerve impulses take place. It is also important for the electrolyte balance and accordingly regulates the amount of fluids in the body.

Does not contain technological additives and harmful substances!

Green peppercorn is a spice for salad dressings, sauces, meat and vegetable dishes. Compared to black pepper, it has a milder taste and a fresher aroma. It can be used whole or ground. Before adding to the salad, it can be pre-soaked in water or wine.